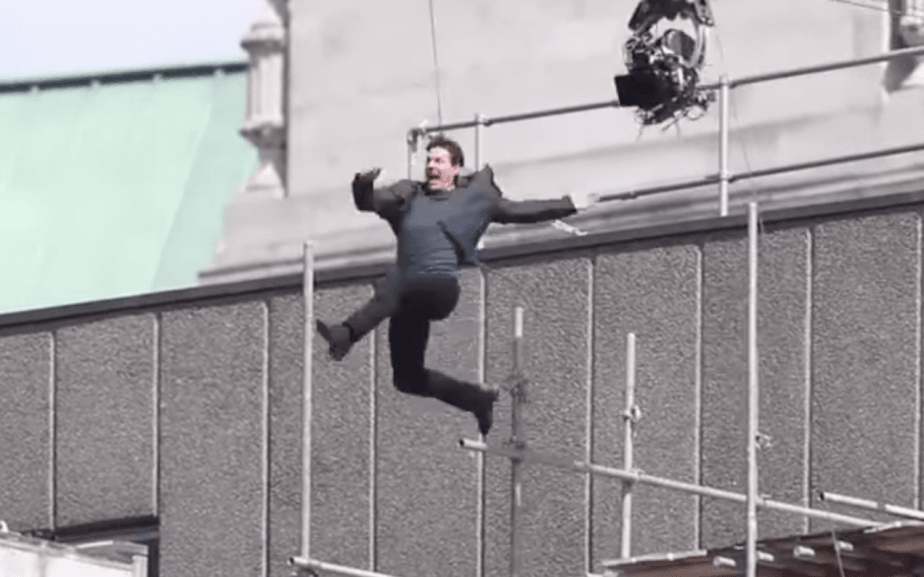 Some of the shoots planned in London for Mission: Impossible – Fallout, the sixth film in the franchise, were cancelled over the summer and autumn of 2017, after Tom Cruise injured himself leaping from the roof of one building to the next. But once he’d healed up, the star was back and performing more frantic stunts around the Thames at Bankside with a cast and crew of 250.

He told Graham Norton about it here and you can see the leap that caused all the problems in the trailer here.

“In the Southwark scenes, Tom Cruise leaves Blackfriars station for Bankside, looking for his target, August Walker, who is played by Henry Cavill. Cruise, as Mission: Impossible’s Ethan Hunt, runs along the river, under the arch of Blackfriars rail bridge.

“A helicopter passes, flying very low over the river. It climbs, heading toward the central chimney of the Tate Modern art gallery. With nothing else to go on, Hunt follows it, running as fast as he can, weaving through crowds of pedestrians.

“Hunt races into the gallery and sees Walker disappearing through a door marked PRIVATE. Walker steps inside an old service elevator and pulls the manual door closed before Hunt can get to him. He manages to grab the bottom of the elevator as it ascends.

“Hunt climbs up the lift shaft and exits out onto the roof of the chimney via a trap door. The downdraught from the helicopter blows him backwards. Walker is inside the helicopter and looks out of the open side door as it starts to rise. Hunt fights against the wind and tries to get to the skid.

“The production made some generous donations to local residents to thank them, via the Bankside Residents Forum and the Falcon Point Tenant Management Organisation.

“Rather obviously this was a complicated shoot that required helicopter licenses from the Civil Aviation Authority as well as permission from the Met Police for the characters to carry fake weapons.

“The shoots that didn’t go ahead included Clapham Tunnels in Lambeth where the gang was going to regroup after breaking a villain out of a prison vehicle in Paris. This was due to be filmed in August 2017. The Clapham Tunnels are a remarkable location where Londoners used to shelter during the Blitz.

“And Tom Cruise as Ethan Hunt was due to receive his mission in Tanner Street in Southwark, scheduled to film in September last year, but this too couldn’t go ahead.

“Despite the setbacks, the London filming looks incredible. We helped out the Mission: Impossible (5) Rogue Nation in 2014 and we certainly hope to see them again next time.”

The film opens next month.