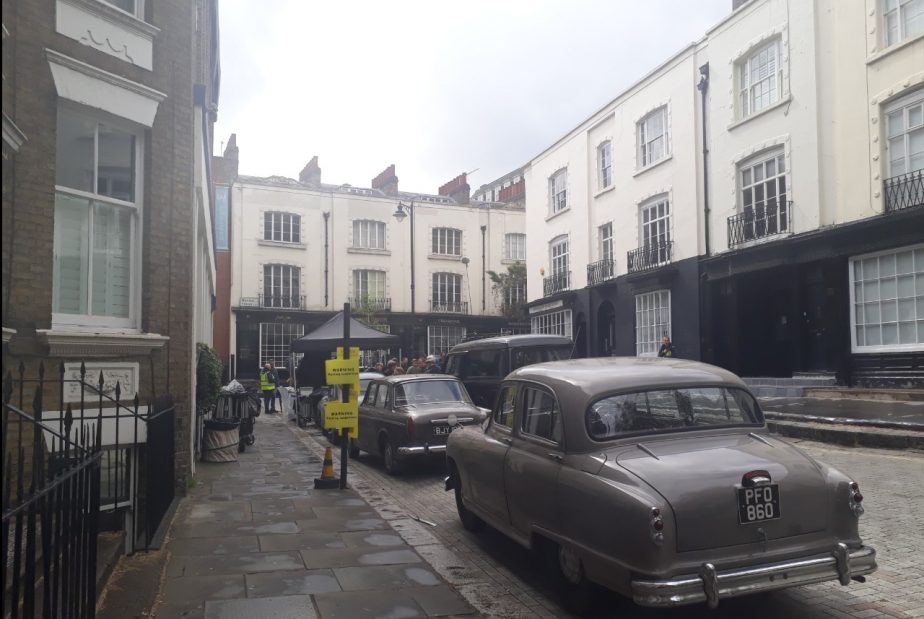 Pennyworth, the latest Batman Prequel, described by the series creators as retro and R-rated is currently on Epix and runs for 10 episodes.  Bruce Wayne’s butler, Alfred Pennyworth is a former SAS soldier who takes on local organised crime in 1960’s London.

Several streets in Camden welcomed the large numbers of cast and crew which at times felt more like a feature film than a TV production.

Juliet McConnell, Film Officer for Camden, says: “this was particularly challenging. Although this was technically a TV drama with the usual tight deadlines, many of the shoots had a cast and crew of 100 or more.  The locations team also faced regular script changes which added to the challenge of sourcing and facilitating locations with only a couple of weeks’ notice.   The Locations Team did an excellent job of ensuring that they communicated their plans fully to the community and generously donated to a number of charities and TRAs.”

Grape Street in the West End doubled as a Soho Street with glittering neon signs, vintage cars, a wet down and smoke effects for atmosphere.

Senate house on Russell Square provided the setting for an army base.

In Southwark locations doubled for the East End with the Kings Arms in Hatfields and the Mayflower in Rotherhithe Street standing in for East End pubs.

King Stairs Gardens also provided another location for the series.

The production made donations to Centre Point (the young people’s homeless charity) and the Mayor of Camden’s chosen charity at the time – The Camden Music Trust.  They also donated to Woburn Walk Traders Association, Somerton House Tenants Association and the Flaxman Terrace TRA.

The Somerton House TRA regularly puts filming donations towards re-planting and maintaining their garden planters and actually won a Camden in Bloom 2018 prize for their ‘Green Corner’.